There are over 900 ligaments in the human body.

Ligaments stretch naturally while in use. Sometimes, however, they don’t return to their natural position after being stretched.

This failure to return to their normal position is most often caused by stretching them too far past a certain point. It typically results in a tear or a sprain.

Sprained and torn ligaments cause pain ranging from mild to severe. Because of their location in the knees, ankles, and shoulders, these injuries can make normal motions and activities difficult.

An orthopedic surgeon provides a variety of non-surgical and surgical treatments to help you recover from ligament injuries. 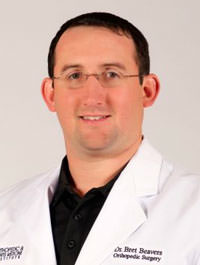 Dr. Beavers is an orthopedic surgery doctor serving the DFW metroplex. If you are having pain in a joint, torn or sprained a ligament, or have broken a bone contact his office for a consultation.

What is a Ligament?

The purpose of a ligament is to connect one bone to another bone.

They’re made of a strong, fibrous tissue that’s capable of stretching. Ligaments are located at the joints to hold these joints together.

For example, the ACL (anterior cruciate ligament) is located in the knee. Along with three other ligaments, it helps hold the knee together and operate smoothly as a hinged joint. The ACL, in particular, connects the femur to the tibia.

Problems arise when a ligament is placed under too much stress. This is typically caused by being stretched past a certain point. Sometimes, it’s caused by repetitive stress (overuse) or being held in a certain position for too long.

Unfortunately, ligaments usually can’t repair or regenerate themselves. This is why orthopedic surgery is often needed, especially for torn ligaments.

Difference Between Ligaments and Tendons

Ligaments and tendons seem more similar than they are in actuality.

Although they’re both made of fibrous connective tissue, they perform very different functions for the human body.

As mentioned above, a ligament connects two bones at a joint. It’s a ligaments job to hold the joint together and return it to the same position after use.

Tendons, on the other hand, connect bone to muscle. They help the muscle move the bone, thereby allowing you to make movements and motions.

Orthopedic surgeons are trained to deal with a wide variety of ligament problems. A few of the most common include:

Anyone can experience a ligament injury, although they are most common in athletes.

The knee and ankle are the most common joints/ligaments injured both by athletes and non-athletes.

For example, the knee is particularly vulnerable to damage from sudden movements, changes of direction, and traumatic impacts.

Symptoms of a Ligament Tear

The exact symptoms you experience will depend on the specific ligament injury.

That said, there are certain symptoms that accompany almost every ligament injury or problem.

At the top of the list is a severe or ongoing pain. Severe pain in a joint often signifies a ligament problem – or at least a problem worth looking into. The same goes for a more mild pain that doesn’t go away after a few days.

Other symptoms of a ligament tear include weakness in the area, an inability to bear weight on the body part, and loss of range of motion.

If you noticed a popping or crunching sound when the joint was injured, this could also signify a torn ligament.

These vary widely depending on the specifics of your injury, but typically consist of the following:

Most orthopedic surgeons combine all of these techniques into a single treatment for the most effective recovery and rehabilitation possible.

The majority of ligament sprains will heal on their own.

Although an orthopedic doctor might recommend a non-surgical treatment like pain management or physical therapy, the injured ligament will heal on its own time with proper rest.

Ligament tears, on the other hand, often require surgery. This is especially true for major ligaments like the ACL. A torn ACL cannot heal on its own and almost always requires surgery.

After reconstructive surgery, many orthopedic surgeons recommend multiple months of rest (often in a brace) followed by an aggressive physical therapy and rehabilitation program. Depending on the extent of your ligament surgery, you might be able to return home on the same day as the surgery. Other times, you’ll have to stay in the hospital for a night or two before returning home.

How an Orthopedic Specialist can Help

An orthopedic specialist will start by diagnosing the cause of your pain. For example, knee pain is often caused by a torn ligament, usually the ACL or MCL. Once diagnosed, the orthopedic doctor will then evaluate the problem to develop the best treatment plan.

Although it’s not always necessary, an orthopedic surgeon will recommend ligament surgery if your condition warrants it.