If you have a urologic condition that isn’t treated effectively with medication or other approaches, your doctor may recommend surgery. That doesn’t always mean that you’ll have open surgery or spend several days in the hospital and in recovery. Robotic surgery was developed to minimize a patient’s suffering, improve surgeons’ skill and enhance overall surgical outcomes. 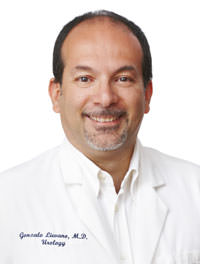 Dr. Lievano is a Urology doctor serving the DFW metroplex. His primary office location is at Baylor Scott & White in Fort Worth, Texas.

How Does The Da Vinci Surgical System Work?

With the da Vinci surgical system, the surgeon works from a console. A cart that sits at the patient’s side contains interactive robotic arms that are operated from the console. Tiny instruments are mounted on these extensions. One of the arms contains a 3-D camera that magnifies the surgical site, giving the doctor a clear view.

The robotic arms are designed to mimic the range of motion of the human hand. However, they may move more smoothly and precisely. They’re always controlled by a human operator, whose hand, finger and wrist movements are transferred to the robot’s arms. A surgical team monitors the robot where the patient lies.

The da Vinci system has enabled doctors to do more complex work with a minimally invasive procedure. Laparoscopic surgery was developed as a way for surgeons to minimize the intrusion into a patient’s body too.

Instead of creating a large incision and performing an operation manually, doctors who conduct laparoscopic surgery can make smaller openings and use tools to minimize damage and side effects for the patient.

However, these hand-held instruments often have long shafts and aren’t as flexible as those used in Da Vinci surgery. The physician must look away from the tools and watch a 2D image on a screen to view the target and guide his or her movements. An assistant remains at the patient’s side and uses a camera to record the anatomy and surgery.

In contrast, the surgeon working at the da Vinci console can remain seated. His or her eyes are in line with the equipment as the instruments and camera are operated. This enhances the surgeon’s visualization of the procedure. It also offers more precision, heightened dexterity, and a more comfortable working environment.

Benefits To The Patient

Patients can benefit from da Vinci surgery because they aren’t confronted with the risks of open surgery. Individuals who undergo robotic surgery:

When it comes to urological surgery, patients who are treated using da Vinci technology are also more likely to:

A prostatectomy involves removing some or all of the prostate. This may be indicated for an enlarged prostate that interferes with normal urinary function or causes pain. It may also be necessary to remove a prostate that contains cancer cells.

A radical prostatectomy is usually conducted when men have prostate cancer that hasn’t spread. A doctor removes the entire prostate along with surrounding tissues and lymph nodes. Doctors may order testing and blood tests to make sure that the cancer is limited before suggesting this procedure. Other tests that may be conducted before a radical prostatectomy include MRI or CT scans and ultrasound.

A simple prostatectomy involves removing a portion of the prostate. This may be required when an enlarged prostate blocks the flow of urine or affects the kidneys. Many people put off this helpful procedure because they fear that they’ll lose some bladder control or experience erectile dysfunction.

However, the symptoms of an enlarged prostate interfere just as much with your quality of life. Removing the center of the prostate can help prevent additional complications.

With da Vinci surgery, patients experience fewer side effects from surgery. Instead of making one large incision, as is done during open surgery, the physician will make a few tiny incisions. The doctor will feed the camera and surgical tools through these small openings. This allows the surgeon to remove the exact part of the prostate that’s causing problems and reconstruct it effectively.

One of the concerns when removing the prostate is that nearby tissues and nerves will be damaged. If this occurs, patients may experience reduced sexual and urinary function.

To minimize this risk, you may wish to look into a da Vinci prostatectomy. This relatively new technology has shifted the face of prostate surgery. According to research, fewer than 10 percent of radical prostatectomies were done with minimally invasive procedures in 2003. That number was boosted to about 43 percent by 2007.

Surgery is often indicated for kidney disease or cancer. In the past, this may have required losing an entire kidney. The da Vinci technology can reduce this risk. It’s referred to as kidney-sparing surgery. When you undergo a da Vinci partial nephrectomy, the healthy parts of the kidney are not touched; only the damaged tissue is removed.

One of the risks that is associated with kidney surgery is the warm ischemic time. This refers to the time frame during which an organ maintains its body temperature after the blood circulation has been limited because of surgery.

A cystectomy involves removing all or part of the bladder to treat bladder cancer. It can be done with open surgery, traditional laparoscopic surgery or da Vinci robotic surgery.

In addition to a minimized risk of complications, da Vinci surgery for a cystectomy can lead to less pain and a diminished need for narcotic pain medication after the operation. Surgeons who remove lymph nodes using this method may have a better yield.

Sometimes, surgery is the best way to treat a urinary obstruction. In many cases, the healthy part of the kidney must be reattached to the ureter after the blockage has been removed. This procedure can also be done with da Vinci technology, resulting in a shorter hospital stay, minimal scarring and reduced utilization of narcotics.